Joseph Waring LIVE FROM RISE 2016, HONG KONG: In its efforts to expand the reach of the internet, Facebook is focused on making content relevant for local communities, which means supporting more languages around the world.Facebook is available in about 90 languages worldwide, and “we have a robust pipeline to add more and more, but we have a long way to go,” said Ime Archibong, Facebook’s director of global partnerships. “A phased rollout is where we’re focused right now,” he noted, during his presentation this morning.“Something as simple as language localisation is massive and it pays dividends,” he said.Only 55 of the 7,000 odd languages around the world that are spoken frequently are strongly supported on online, which means there are more than one billion people whose primary or secondary language isn’t supported online, he said. 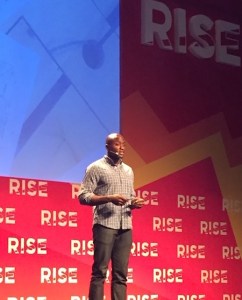 Archibong (pictured, left) said developers and entrepreneurs face a number of global challenges in developing products for local and global audiences.“If you are on the internet today, you are in the minority because there are still 4.1 billion people on the planet that have not yet been connected to the internet. This is a big challenge but also a big opportunity.”Of those online, he said the majority are quite underserved. While 90 per cent of the online population is within reach of infrastructure that allows them to get online, two-thirds of those have access via mobile networks, with 2G service accounting for much of that connectivity.Addressing the issuesBased on Facebook’s experience in tackling these daunting issues, he outlined a number of solutions.To improve connectivity, he suggested companies focus on affordability as well as making sure people understand the value of the product or service to their daily lives. “This awareness gap that exists is more of an issue than affordability in some cases and definitely more than infrastructure.”Facebook’s primary approach to address this, he said, is its Free Basics programme, which is part of its broader Internet.org initiative. Free Basics is available in 40 countries, with an estimated 25 million people “on-boarded” to the internet, he said.“Clearly our target is 4.1 billion people, so we have a long way to go, but we’ve found a model that works and we’re looking forward to scaling this up over time.”To cater to the underserved market, he recommended focusing on low bandwidth consumption and designing products for low-end or mass-market devices. He pointed to its launch of Facebook Lite, with less than a 1Mb footprint, which means it downloads on a 2G network in seconds.He claimed in just nine months it’s used by more than 100 million people around the world and is the fastest growing Facebook service.Emphasising the importance of partnerships, he gave the example of Jofom — an online job board for new internet users in Indonesia and Philippines, which was one of the first services to launch on the Free Basics platform. About 91 per cent of its traffic comes through Free Basics. In Indonesia alone, Jofom has served more than 100,000 jobs.Archibong said 83 per cent of Facebook’s 1.65 billion users are outside of North America and 70 per cent of developers and startups that use its platform and tools are also not in North America. Author HomeAsiaNews Facebook pushes local-language capabilities Related Australia funds regulator to oversee new media law AddThis Sharing ButtonsShare to LinkedInLinkedInLinkedInShare to TwitterTwitterTwitterShare to FacebookFacebookFacebookShare to MoreAddThisMore 01 JUN 2016 Tags